A place to find info about the occult deities, demons, gods and goddesses.

Lilith is maybe one of the most interesting and controversial deities I’ve taken an interest in lately. While I suppose really you’d call her a demon, she did have a longstanding cult worshiping her until about the 7th century CE. When we think of Lilith, we maybe just have the biblical understanding of her; the wife of Satan or the Mother of Demonkind, but her history is far older and much more diverse than I thought!

Lilith’s origins trace back to ancient Babylonia, which is about 2300 BCE (Before Christian Era). In that time, she not only had another name but was actually a type of demon called lilin or lilitu. They would wander deserts and wastelands and because of this they were associated with owls and wild beasts. 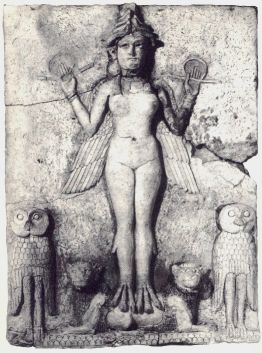 These demons stem from a mythos of Ardat Lili, a ghost maiden who never had sex before she died. She would prey on men at night to fulfil her sexual needs, and all encounters with her were fatal.

She only entered the Jewish demon lexicon much later in history, and simply to explain away some inconsistencies between the first two chapters of Genesis.

More often than not, she is used to normalize subjugation of women in this way.

In Genesis 1, Lilith was created alongside Adam, at the same time and from the same soil. They were equal. Adam, though, tried to dominate Lilith and subjugate her, and when she refused she left the Garden. It is after this that Eve is created from Adam’s rib and made to be submissive to him.

What it comes down to is, Lilith is a strong feminine figure who wouldn’t submit to the will of another, and for that she was made into a villain in the Judo-Christian faiths.

Because the history of Lilith is so far reaching, both multigenerational and multicultural, she has many names and forms. The idea of who she is and what she means continues to change to this day. There are many now that see Lilith as an inspirational feminist figure, one who stood againt patriarchal norms and lifted the women around her. She is strength, a symbol of anti-abuse for some, and a spiritual touchstone for many new pagans.